Pioneer Memorial Library Blog is being

You will find our advertisements

and discussions on the

Like us on the page and you too can interact with us!

We find that we have better interaction with citizens and loading materials is simpler for all of us.  We will keep the PML Blog site up for archival purposes and welcome you to view the materials posted.

December Booked for Lunch - inspired by a family of musicians! 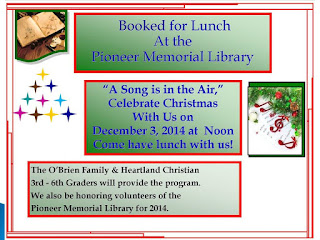 The O'Brien family brought in the Christmas season for us.  Mother, and 3 children played stringed instruments, while 2 other children: helped with staging, music and backdrop.

They played some great classics and fun materials for us.  We enjoyed hot soups or chili with a veggie tray and hot cinnamon rolls!

Heartland students also presented one song for us during the program as well.
The program was sponsored by the Friends of  Pioneer Memorial Library. 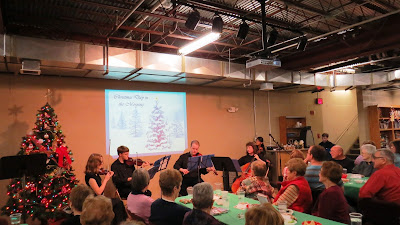 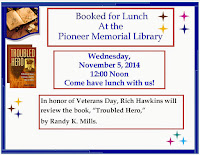 Rich Hawkins presented the book, "Troubled Hero," in honor of Veterans Day for the Pioneer Memorial Library.  He discussed the background of a young man who served during the Vietnam War and the way it effected him, his family and community.  Hawkins passionate presentation of the book, reminded us all that war does affect our lives dramatically when it touches the personal lives of those we love. 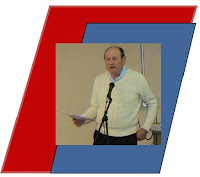 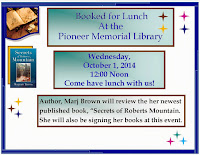 Author, Marj Brown spoke at the Pioneer Memorial Library on October 1, 2014.  Her newest book entitled, "Secrets of Roberts Mountain" was hot off the press.  She presented a great presentation about this fiction novel and her writing process. 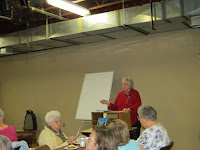 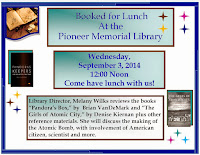 The Pioneer Memorial Library held its opening Booked for Lunch for the season on September 3, 2015.  Melany Wilks, Library Director spoke on two books: "Girls of Atomic City," by Denise Kiernan and "Pandora's Box," by Brian VanDeMark.

The "Girls of Atomic City," brought up discussions of secrecy of the work being done by so many women and men in this specially located place.  The difficult living conditions were highlighted for many who lived in the place.

Wilks also discussed the difficult decisions the scientists had to make regarding creating an instrument of mass destruction and the knowledge and problems it would bring to the future of our world. She pointed out that the scientists believed that if the this technology was to be discovered and implemented by a fascist nation, the world would be in deep trouble.
Posted by Colby Public Library at 2:22 PM No comments: 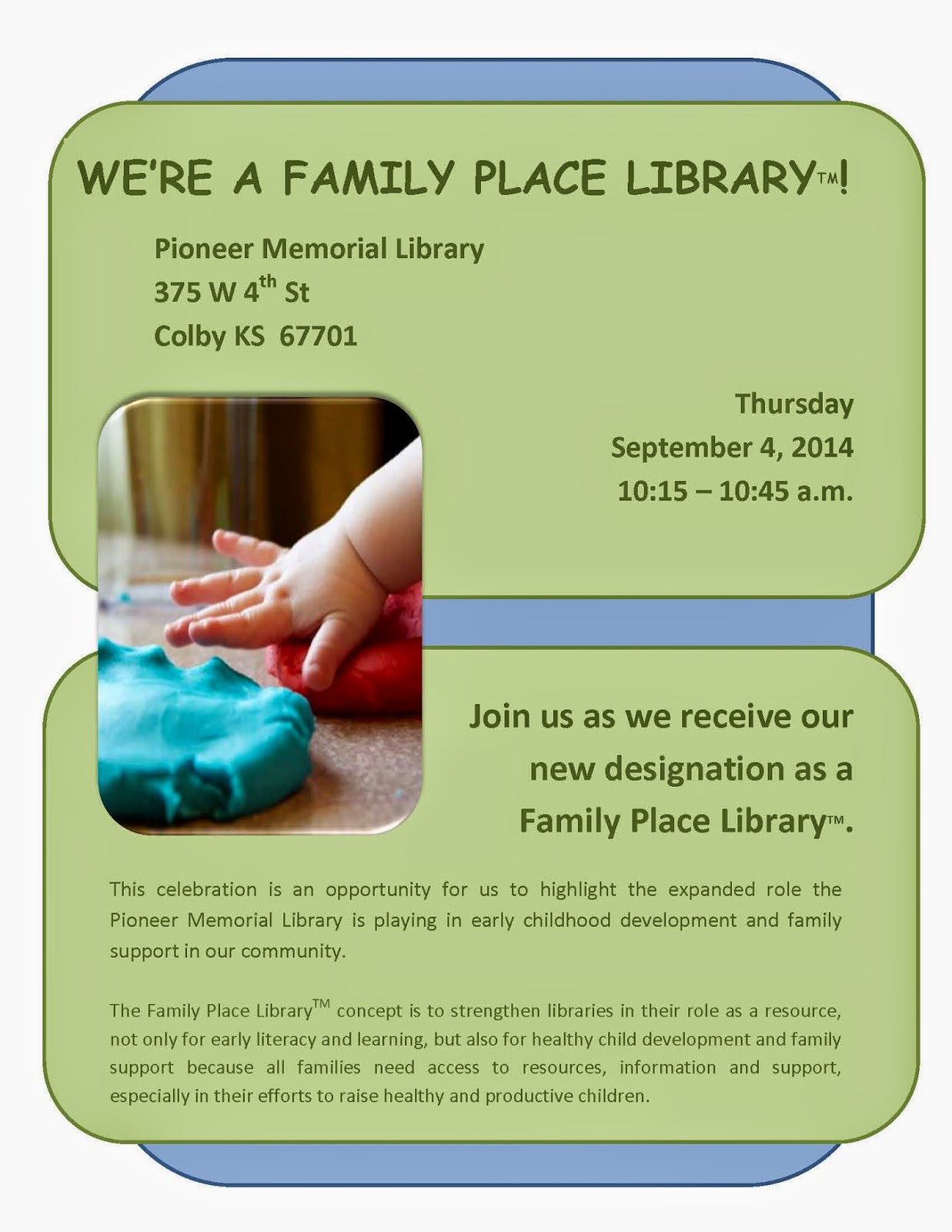 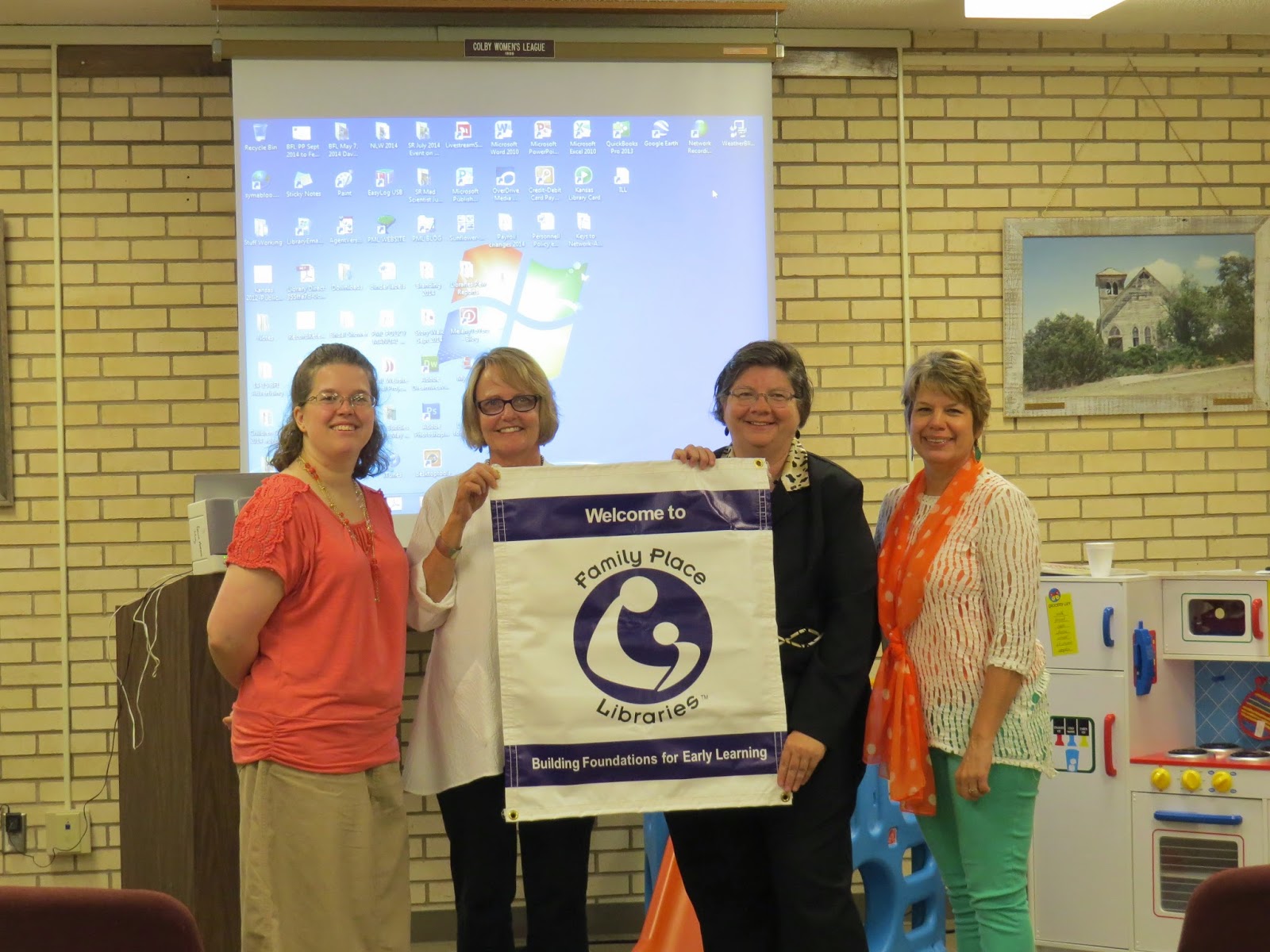 We officially became a Family Place LibraryTM on Thursday September 4th! This comes after a two year process of offering parent-child workshops and  re-energizing the libraries' focus concerning young children and their parents.

The Family Place LibraryTM concept is to strengthen libraries in their role as a resource, not only for early literacy and learning, but also for healthy child development and family support because all families need access to resources, information and support, especially in their efforts to raise healthy and productive children.

Healthy Choices for Home and Work!

The Thomas County Coalition and the Pioneer Memorial Library hosted Business After Five, a local Chamber event for businesses. The library is a member of the Coalition and as a member we created fund healthy food choices for hors d'oeuvres and 4 different types of infused water.  We also had a database for guests to add their health information and make a dietary workup for themselves, the Wii Fit up and running, a great Standing Desk, Cycling device for exercise under your desk, an exercise cycle with a computer plugged on the handle bars.

We had information about Colby's Walking Bus routes, trivia on food, healthy cookbooks and nutrition ideas and so much more! 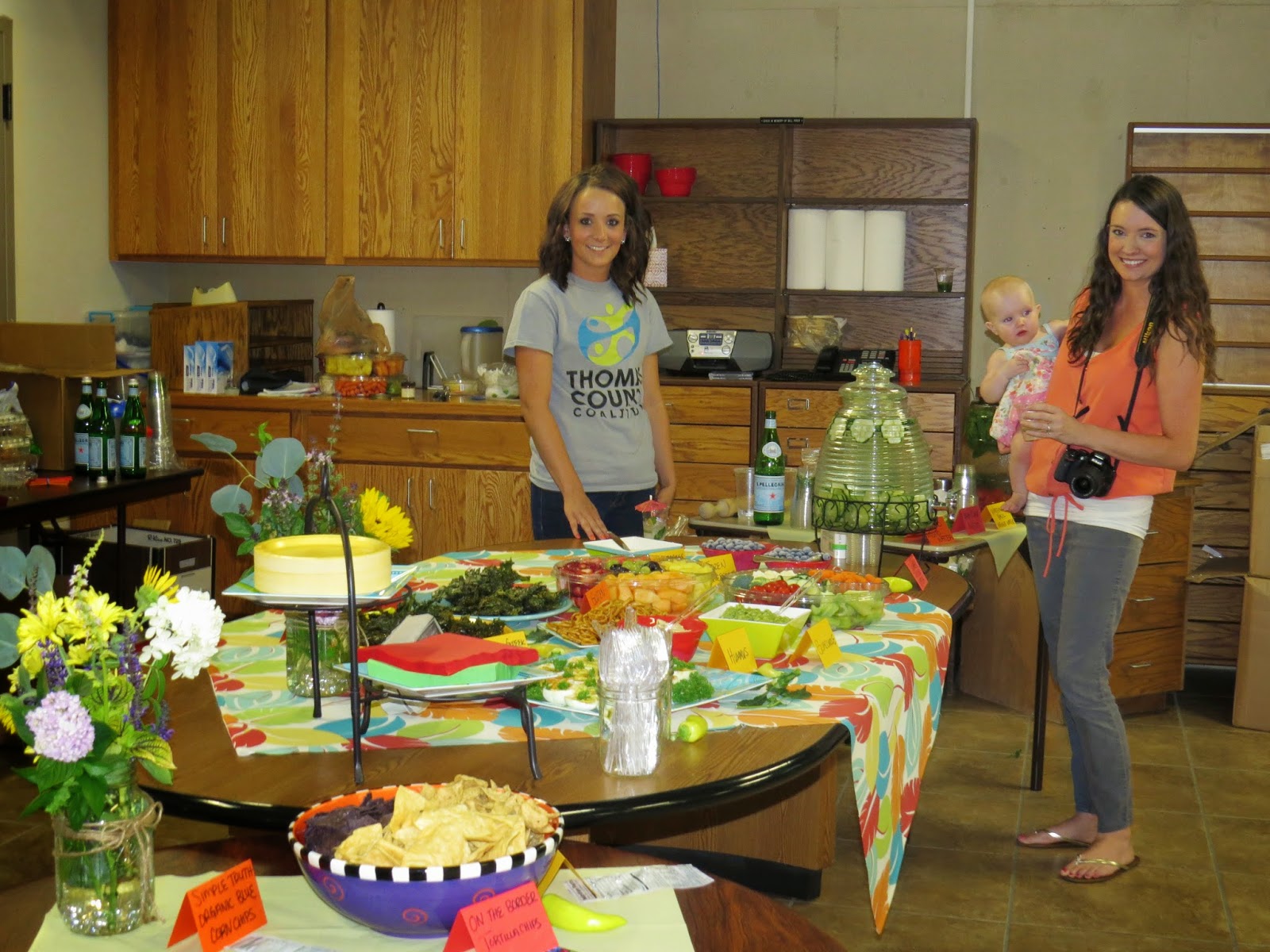 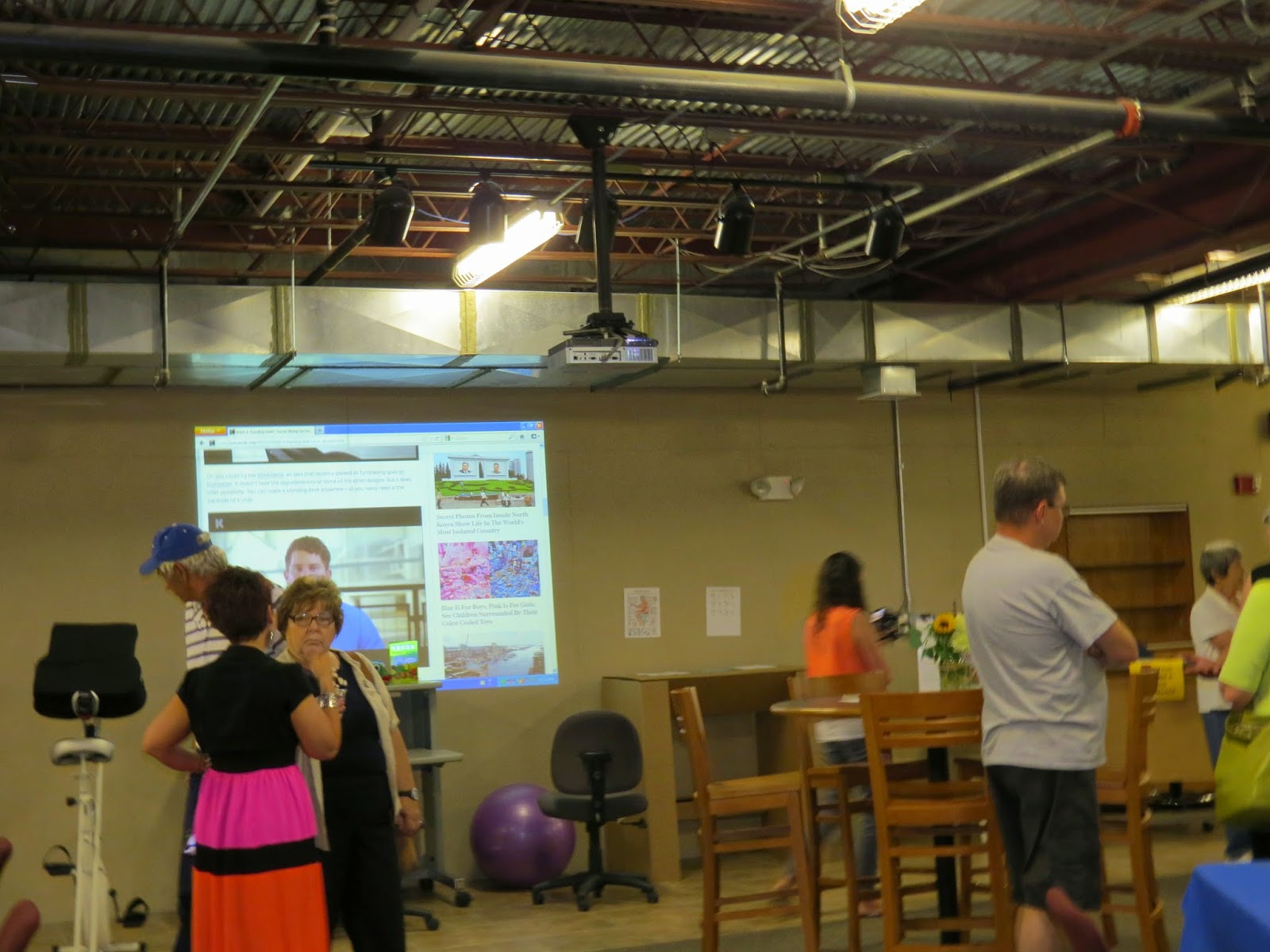 Posted by Colby Public Library at 9:10 AM No comments:

Library Link - Reveiws of Items in the library.